”Watch Bird Box!” The megaphone of the internet shouted. Well, the internet was wrong (as it often is). Not sure what an estimated 6 million viewers saw in the Netflix original movie directed by Susanne Bier where sight is forbidden, but I remained blind to the appeal. Less than five minutes in, I said, “blind guy saves the day.” I figured if no one was allowed to see what would be the foil to that? Somebody who doesn’t need to see. Easiest resolution ever. Writers, step your game up.

To be fair, there’s good, bad and ugly but ugliness is destined to dominate this review (stuffed with spoilers.) In order to properly tear it apart, I have to give away the secrets. This review is sure to be the opposite of the vagueness that is this movie. Vagueness to the degree of not even knowing where you are like the characters Felix and Lucy played by Machine Gun Kelly and Rosa Salazar.

Buckle yourself in readers of Mindless Peace because Bird Box has me irked beyond restraint. I do promise to end with the good of the film but first, ranting.

Why Bird Box was quite possibly the worst film of 2018:

The movie is actually based on Bird Box the novel by Josh Malerman that came out in 2014. Late 2018 was an unfortunate time to release the movie adaptation due to the intensely similar John Krasinski film; A Quiet Place which came out earlier this year as well. What sound is in A Quiet Place, sight is in Bird Box: not allowed under any circumstance. 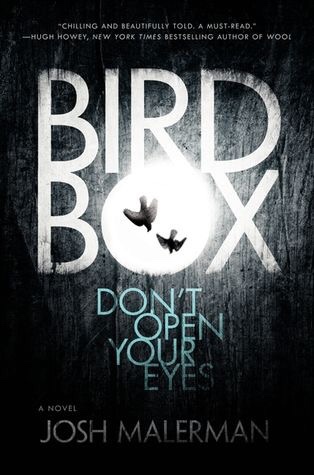 The commonalities of A Quiet Place and Bird Box involve similar antagonists; fatal mysterious creatures that no one can identify. Also, the cinematography and music echo each other greatly. The difference between the one where no one talks and the one where no one sees, is that the former doesn’t leave you hanging with the relentless itch of what are they up against? The entire time. The villain(s) in A Quiet Place is revealed early but not completely. We only know enough to know what the threat is. An outline of what it looks like. Why couldn’t BIrd Box do that? No one is asking to peek behind the curtain but man, leave a trail of breadcrumbs. The entire cast is clueless as to what’s after them for the entirety of the film. The ambiguous entity that makes everyone kill themselves. Even with a five-year jump into the future, no one knows, everyone is still just running blind, literally. Even Lil Rey Howery who played Charlie, the supermarket worker/writer had no real answers despite art imitating life in the book he wrote. He figured out the cynical plot in Get Out as Rod, the paranoid TSA agent who was right the whole time.

No such luck in Bird Box though. What’s more, is that Charlie somehow magically had his completed manuscript in hand as he ran for his life to the sanctuary house. As a writer, I can say having a completed manuscript is a miracle in itself, let alone taking it with you while you fight for your life. Charlie wrote a dystopian novel much like the world those in Bird Box are living in. He insisted it was not like The Hunger Games.

He says It’s not like kids killing each other. He says It’s about real stuff, meaning demons. He goes on to name them, all different ones from all different religions. Different names of demons with different origins that all translate to ‘the end of us.’ Can you hear the eye roll? What an obscure stretch for conflict. What’s the problem? Oh, well, it could be anything. No one knows. Don’t open your eyes though. Seriously? C’mon. This is the only definitive thing to go on though so viewers are stuck with a wispy idea of what could be the end of humanity.

It’s unrealistic to leave everything up for interpretation. Movies are not fortune cookies or reflective therapy sessions. This is not a DIY project. Viewers are smart but nobody can make something out of nothing except God. Also, if they were demons, where was God? Classic good and evil theme right there but nope, we all travel through Vague Land for 124 minutes. Maybe it would’ve been a good movie if I had watched it blindfolded. Then again, if I had done that I would’ve missed the handsome Trevonte Rhodes who plays Tom, the love interest of main character Malorie played by Sandra Bullock.

Bird Box is not really about a giant deadly leafblower. Honestly, the Big Bad Wolf would’ve made more sense. Blowing everybody’s house down. Oh, wait, it doesn’t destroy houses or disturb electricity. Right. That makes sense. Destroy minds but leave the lights on. The central themes are actually connection and family, ones that Sandra Bullock portrays perfectly despite being blindfolded for fifty percent of filming but it’s so hard to focus on that without knowing a single definitive thing about what everybody is shielding their eyes from.

The Mist directed by Frank Darabont, released in 2007 was similar to this too. The difference was that those who were not caught up in the poisonous mist were smart enough to take refuge in a supermarket. The Bird Box people risked their lives to get to a supermarket and then decided to risk it all again to go back to the house. Despite the drunken revelation of John Malkovich’s character Douglas, who points out the obvious that they have all that they need there and they should just stay.

“There is no statistical, logical or legal argument for trying to get back there,” Douglas said, holding a half drunk bottle of booze. He lost his wife to the monster and it’s the end of the world so he was having a bad day.

“Well here’s an argument, we’re not assholes and we’re not staying,” Malorie counters. Okay, so there is a solid moral argument to not leave any man behind but why not go back to bring the others to the supermarket? Multiple years worth of food and drink, why not live there? Didn’t they see The Mist?

The Happening is the third film similar to Bird Box. The plot is a mysterious threat causes people to commit suicide, except it was better than Bird Box because they revealed what the antagonist was eventually, which enabled the characters to find a solution. How can a solution be found if the problem cannot be identified? That’s the arc of every story. Incident, conflict, building tension, climax, less tension and then resolution. What’s a story without resolution? Bird Box.

I kept asking myself ‘why’ the entire film. On a loop like a three-year-old. Why? Also, how did Tom get the proper amount of protein to stay so buff when food was so scarce?

If I had been watching Bird Box with any of the heartwarmingly adorable tiny humans that I know, our responses would’ve been the same. Audible questions. (I tend to watch TV out loud when I’m incredibly interested or irritated. Yes, I’m aware that it’s annoying.)

The only insufficient answer offered:

1. Is that chick from American Horror Story? (It was, she was in AHS: Apocalypse. In Bird Box, Sarah Paulson plays Jessica, the sister of Malorie.)

2. Was Sarah Paulson also on Grey’s Anatomy? (Yes. She was Dr. Ellis Grey.)

3. Why don’t we at least know key character’s fears so we can infer something?

4. Why didn’t coocoobananas Gary talk about the things he drew?

5. Why didn’t he at least write about them on the back?

7. How did it get to the States? Did it just float? Did it take United?

8. No one figured out anything in five years, really? Y’all still just running blind?

9. Why do most people die and some people just go crazy?

10. Why is it only the mentally ill who don’t kill themselves and instead, think the monster is beautiful?

11. How can the image of the thing on a computer screen cause BD Wong’s character Greg to bash his own head in? If that’s the case wouldn’t Gary’s sketches have made people off themselves too?

12. Why does it destroy everything except houses and people?

13. Why is it only birds in a freakin’ box (that somehow survived the rapids) that are the only animal who tweet a warning when the shadow is coming?

14. If the monster can destroy anything except for some reason people, won’t it ruin the sanctuary?

15. If blind people are safe, what about the sighted?

16. What does that mean for future society?

17. Will people blind themselves to survive?

18. What if people conquered their greatest fears?

19. How did Tom stay in such good shape?

20. Why does this movie exist?

This movie is what writers would call; a first draft. More questions than answers does not a good movie make.

Sandra Bullock does wonderful work no matter the movie, so no she should not be referred to as ‘the lady from Bird Box’ when she has Oscars for The Blind Side and Gravity. Not to mention her wonderful comedic performance in The Proposal.

Trevante Rhodes was excellent as well, despite the weak plot. Just as he was in Moonlight, the movie that actually won Best Picture and not the initially announced La La Land. How delightfully ironic it is when not even Hollywood can get the performance right. Sorry, guys.

Give it up for the kids, Girl and Boy who were eventually given legitimate identities when they became Olympia and Tom in honor of their guardians. Little Tom was played by Julian Edwards and little Olympia was played by Vivien Lyra Blair. It’s beyond impressive that these kids did so well in such a tense movie without overacting, whining or crying when Sandra Bullock was yelling at them because I probably would have. The anger-motivated from parental protection of course-was up close and personal. Something I believe was refreshing for audiences to see, harshness does not mean lack of love. On the contrary, if it’s done with pure intent, it demonstrates just how strong love is. Love is not a feeling, it’s a promise. It would’ve been nice if the kids could’ve had a more significant role, perhaps in their innocence being the antidote to fear, teaching the adults how to conquer it.

Revisiting question eighteen on the list. What if people had conquered their fears? Would that have been the end of the suicide inciting demon? Could that be the moral of the story? Roosevelt’s famous words; “the only thing to fear is fear itself.”

Probably not because it was terribly constructed film but that’s a good takeaway right? No need to waste your life watching it. Just close your eyes and meditate on the truth that there is no need to fear. The only thing to fear is God and He is on our side.

One thought on “Bird Box review: don’t look at it”