I’m reaching back into my younger years to grab onto the thought that I couldn’t let go of when I fought the wheel of my car to try and maintain control, that moment when I was unsure if I’d walk away okay. What’s bizarre is my only thought was, I don’t want to die, there are so many tattoos I haven’t gotten.

Admirable potential last thought? Not really. Truthful? One hundred percent. This unfortunate anecdote was written for all of the internet to read to illustrate a greater point-the intensity of what it takes for us humans to literally make the moves we want to make before it’s too late.

Why do we need to be scared? Why such a severe, potentially fatal push in what will ultimately be the right direction? I don’t know why it takes the single bullet threat of Russian Roulette to get my blood pumping but it is effective. Writers like me need a threat like that.

Netflix premiered the show You in 2018, starring Penn Badgley (formerly known as Dan Humphrey on Gossip Girl) and it just dropped its second season. The main character Joe Goldberg, is a clean-cut, collected New Yorker who spends the majority of his days inside the hidden gem that is a rare and used bookstore. One day, Guinevere Beck (Elizabeth Lail) saunters inside the bookstore and changes everything for Joe. Beck, as she’s known to her friends, is a writer and Joe loves to read. Beck is also a student and Joe is also a murderer. They’re pretty much meant to be.

Here’s why Beck and other writers should consider the pros of dating a threat like Joe.

Writers are Bad at Writing

You wouldn’t think so given that what we do is in the title but the trouble for many writers is the physical act of writing.

Dating a deviant like Joe fixes this issue for Beck. He makes sure she has time to write. He studies her at first before they’re even together because he’s a stalker and a sadist but then he decides he loves her so things go well initially because Joe makes it his full-time job to eliminate all distractions and toxicity from Beck’s life. Joe’s actions make it easy for her to finally sit down and write.

Writers Need to be Looked After

Once the writer is writing it’s imperative to make sure they’re still eating, drinking, and going to the bathroom on a regular basis. It’s borderline concerning the amount of energy I put into writing once I get started. The world around me practically vanishes.

Having someone like Joe around would ensure that I don’t go malnourished or forget to pee because I’ve been writing for six hours straight. He takes care of Beck. He feeds her. He does her laundry. He takes care of her regular duties so she doesn’t have to think about them. Sounds like a beautiful dream.

Part of being a good writer is having things to write about. We need to experience things so that we can live them a second time on paper.

Excitement, fear, courage, anything dazzling will do. Joe does that for Beck. Just as he is studying her, she is learning him, albeit her approach is that of a regular person’s perspective. Nevertheless, the relationship they have is useful for her writing because it challenges her in lovely, delightful, harrying ways, all of which inevitably bleed into her words.

Joe loves Beck. It’s not a good love but it’s the best a sociopath can do. He puts in the effort. He planned a real New York date where the two of them would visit the notorious spots of Fitzgerald and his wife Zelda.

Love a writer or break their heart. Maybe do both. Well, if you do both it might take us longer to sort out the prose. Love is the best creative fuel I think. Pain works too but it can be messy and stifling. Love is best because when writers are in love, we soar. Love makes us all soar of course, love is actually the brain on drugs in a sense but what’s special about writers in love is that we can translate that high into stories for others to read so that they can feel love without ever having falling in it themselves. Joe has his issues. They’re blood-red flags but he does irrevocably adore Guinevere Beck and that love makes her a much better writer.

Joe Goldberg can be useful but he is what I hope and pray, not what most eligible men are made of. He’s the absolute worst-case scenario for meeting an online date. You wouldn’t know it at first though, which makes him great for writers. Much of my life, as much as possible really, hinges on escapism. Reality bores me. I crave what’s exciting, interesting, intense, odd. Dating a murderer would feel like that. Joe and Beck certainly escalate and that euphoria and terror surfaces in what Beck writes. Joe exists for her creative benefit. 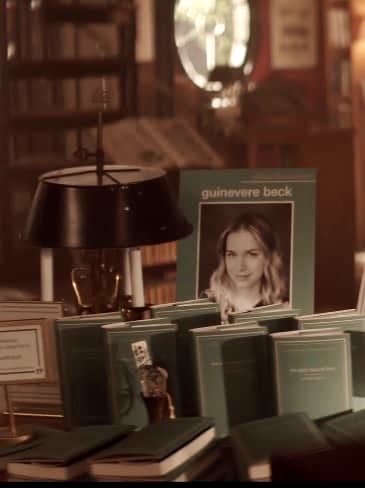 Please oh please get the sarcasm in the second MP post of 2020 and don’t date a murderer who says they love you (or anyone remotely threatening) because that fatal pressure might make you a better writer.

All I could think as I watched season 2 of You, which was not nearly as good as season 1 was that lots of people end up locked in that plexiglass box but only one made a career out of their time there.

At least Beck had a writer’s nook complete with a typewriter and enough time to create a suitable manuscript. A manuscript she was only able to write because of Joe.

Could you write without being forced to? Do it. Be a writer who writes so you don’t become the writer who could have been.