Years ago, when I was in fifth grade I think, I met a man who had to be at least twice my age, maybe three times, everyone seems so much older when you’re the young one. He was professional and very friendly. He had an important job. People liked him. Most everybody did. I liked him too, he was nice. I didn’t realize how odd this was at the time but as an adult looking back on it, what happened was very bizarre and possibly illegal. This is not a story of some sort of sexual perversion, thank God, it’s just a weird story. I don’t want to give away the man’s name or profession because he would be easy to find. The man at my school said he owned tigers. Real tigers. He said I could come to see the tigers. I’m sure even as young as I was I thought he was joking. Where would he keep real tigers? The suburbs are no place for big cats.

“Can I bring my family?” I asked him in the cafeteria that day.

“Sure, bring everyone!” How awesome was this? Everybody loved him and he picked me to come to see his tigers! I’m his favorite. I’m awesome. Tigers are awesome. This is going to be awesome. We met him outside a warehouse. He drove a bright red Corvette. Somehow, I convinced my whole family to come to see these secret tigers. Imagine the parental reaction when your kid announces at the dinner table that a grown man from school wants to show her his tigers. Maybe they agreed to prevent tragedy from happening. My parents were there as was my little brother and little cousin. The adults got briefly acquainted outside the warehouse. I wish I could remember how that went. Meeting some random man outside a warehouse to come to pet a pretty kitty, why did my parents agree to that? At least it was daylight. Was it the trap of a predator or were we going to see trapped predators?

To me, the warehouse seemed to go on forever. It felt like you could easily fit airplanes inside of it. Off to the side was a cage with steel bars. I don’t know if the cage really was small or if the cats inside made it appear that way. The tigers were massive walls of muscle. Their rich orange coats overlaid with black stripes. Beautiful. Terrifying. The cats eyed us inquisitively, one more than the other. Its head was bigger than my body. One cat laid on the floor with its back against the bars, facing away from us. The other stepped lightly, deciding if it was a good idea to come closer or not. “Here they are,” he said. “Don’t put your fingers through the bars.” I looked at him and then back at the tigers who were looking at me. “Open palms against the bars only,” he demonstrated a flat hand that would keep the fingers attached. It was insane to be able to walk right up to them and touch their fur. I pet that cat. 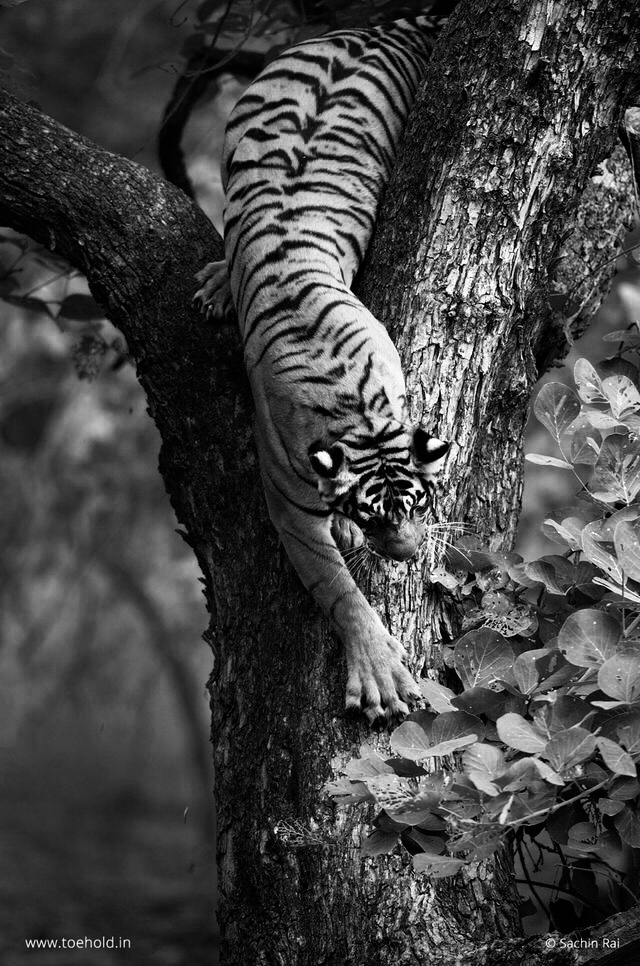 Tigers are the only cat species that are completely striped. They even have stripes on their skin. The density of the stripes varies by subspecies. The stripes on a Sumatran tiger are closer together than those on any other subspecies. No two tigers have the same stripes. Sort of like fingerprints, we all have our own set. Stripes range in color from light brown to black and are not symmetrical on both sides. I don’t remember asking questions. I just remember staring in amazement as I stood there on that concrete floor, knowing those animals could eat me and having so much respect for that power. “Do you want to feed them?” I responded with a higher level of trepidation than the boys. He brought out a few raw chickens. One for my brother, my cousin, and one for me. We fed them through the bars. He coached us so we wouldn’t get bitten. Those cats ate those chickens like they were potato chips, they ate the bones too, snapping them like toothpicks. As soon as those fangs dug into the cold flesh of the raw chicken my cousin ran away from the cage. This was intriguing for the predators who hunt ambush style. The tiger jumped up onto the bars standing tall on two gargantuan paws, growling. His bright white underside on full display. Standing at eight feet it was as if an entire thunderstorm resided in that animal’s chest. 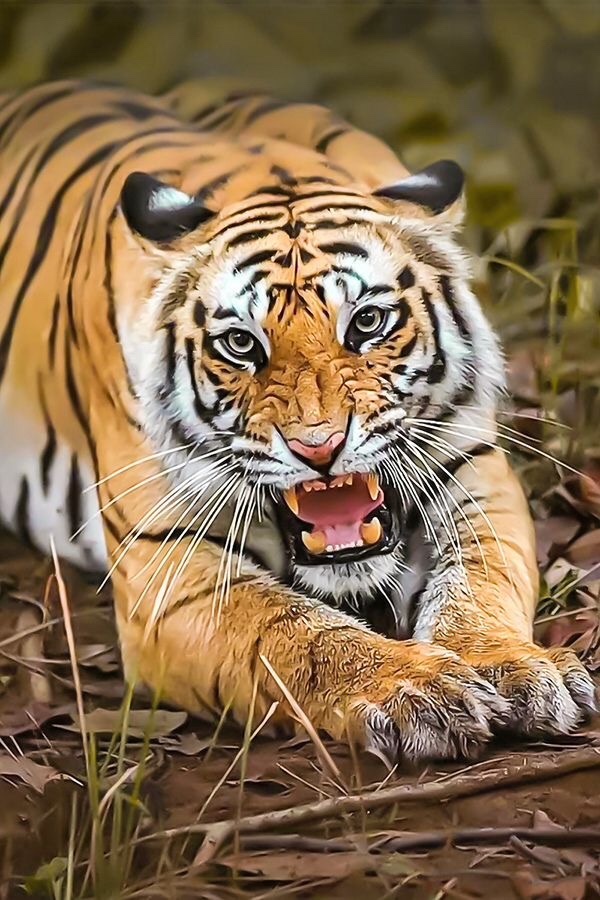 “Yeah, don’t do that. They like it when you run.” An adult tiger can consume up to eighty-eight pounds of meat in one meal (my weight on a good day) back then I was a snack, now I’m a whole meal. “Sometimes we let them out to play. I won’t do that today.” He said they throw big barrels around the warehouse for them to chase. The thought of those literal beasts free and running made the back of my neck tingle. The less inquisitive tiger left her chicken near where she lay. I think one was a male and the other a female but I’m not sure. The one who had jumped up for my cousin was now lightly stalking the other chicken that was not yet devoured. Those padded paws stepping like ballet slippers. Tigers are quiet killers. The cats stared at each other. He seemed to know what he was getting into. We waited, breath held, for him to lunge. No words were spoken. Eyes locked. Feet light. He went for it. Her ears went flat, fangs out, she swiped a paw, he darted to the other side of the enclosure before she could get him. The thunder from her chest erupted as he scurried off, anyone within two miles would have been able to hear it. You know an animal is large when a whole chicken looks small in its mouth. 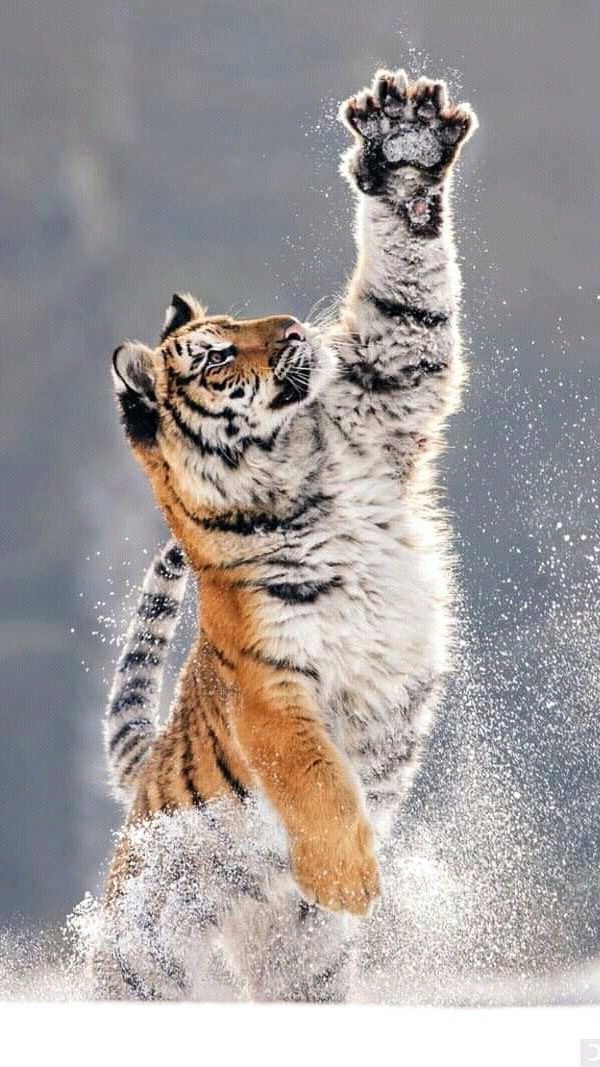 What a weird day that was. I don’t know how he got those tigers, why he was keeping them or what he was using them for, but I do know that his job title had nothing to do with wildlife protection. What I remember most is that the tongue of a tiger is the width of my arm and as rough as sandpaper.